Looking for the lyrics of this popular song?

Hark, when the night is fallingHear, hear the pipes are calling Loudly and proudly calling down through the glen There where the hills are sleeping now feel the blood a-leaping High as the spirits of the old highland men

High in the Misty highlands, out by the purple islands brace are the hearts that beat beneath Scottish skies wild are the winds to meet you staunch are the friends that greet you kind as the love that shines from fair maidens eyes.

“Scotland the Brave” (Scottish Gaelic: Alba an Aigh) is a Scottish patriotic song.

It was one of the several songs considered an unofficial national anthem of Scotland.

Scotland the Brave bagpipes lyrics is also the authorized pipe band march of The British Columbia Dragoons of the Canadian Forces and is played during the Pass in Review at Friday parades at The Citadel and Virginia Military Institute.

In 2006, it was adopted as the regimental quick march of the Royal Regiment of Scotland.

Scotland the Brave is a popular song for pipe bands to play in American parades.

In June 2006, the song came in second in an online poll with more than 10,000 votes to determine the nation’s favorite unofficial anthem, losing only to Flower of Scotland.

The song was used to represent Scotland in the Commonwealth Games until it was replaced by Flower of Scotland from the 2010 games in Delhi onwards.

The Dropkick Murphys song “Cadence to Arms” off their debut album Do or Die is a reworking of Scotland the Brave’s melody.

The song was among the entrance songs for professional wrestler Roddy Piper during his time in the WWF.

Dorothy the Dinosaur dances to this song in the Wiggles’ 1997 videotape: “Wiggly, Wiggly Christmas”.

A comic version by The Corries mixes humorous and topical lyrics. 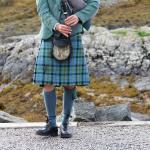